YOU GUYS, YOU GUYS...FOUR DAYS AND FULLY FUNDED.

Yes, you read that right. Just four days into the Evil for Julie campaign, and both the reader and writer editions are entirely funded. As of writing this:

On behalf of the Evil League of Evil Writers:

$5000 was our initial goal because that was what we raised last year for Crestline with our Evil Auction. To surpass that in just a couple of days is tremendous, and everything, minus the Indiegogo/PayPal fees, go directly to Julie and her family at the end of the month.

Of course, we shall not stop there. No, because we have TONS of other perks here to list and twenty-six more days to raise some more cash.

Please head over to the campaigns to have a look at the new additions and stay tuned for more in the coming weeks.

Thank you again to everyone sharing, linking, buying, donating, and supporting this endeavor. Vader says, "If you only knew the power of the dark side." For anyone paying attention, I'd say you guys know. Excellent villainous work, everyone.
Posted by Skyla Dawn at 11:43 PM No comments:

It's time, once again, for evil to rise.

In case you missed it, one of our own was knocked down by the Universe recently: Julie Butcher's husband had a little accident with a chainsaw. He's okay but he's already had multiple surgeries, he has a long recovery period ahead of him, and this costs money. A lot of it.

So we're going to help them out.

There's a full summary page on our site here that you can check out. I was going to list some of the "perks" for campaign contributors but...you know...you can just head over and see for yourself. They are too awesome for words. Get out your pocketbook or, better yet, rob a bank, because you WANT what's being offered.

Writers? We've got you covered. 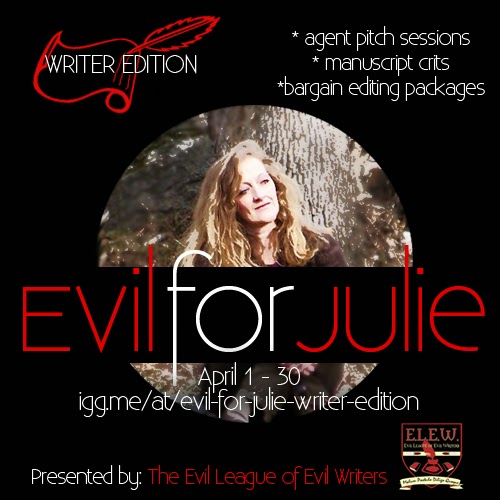 Readers? Yeah you too. 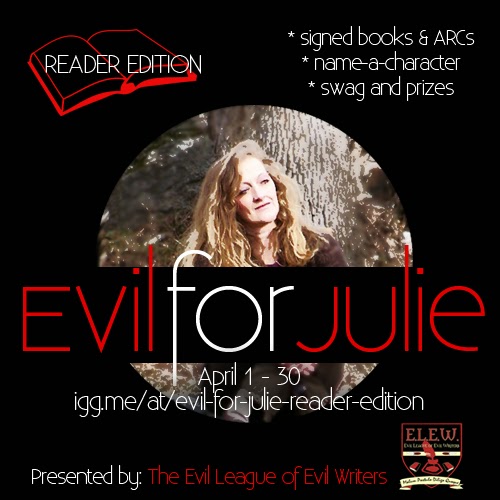 When the Universe kicks one of our own, we kick back.

April 1 is known as April Fool's Day, but this is no joke. I repeat: THIS IS NOT A DRILL. THIS IS AN ACTUAL THING. THE PERKS ARE NOT JOKES. April 1 is also the ELEW's anniversary, so in lieu of an anniversary post this year, we're doing this fundraiser.

So go forth. Be bad guys. Do evil. For Julie.

Initial Evil Thanks must be given to the following people:

Everyone who shared and blogged and advertised this to get perks donated, everyone who donated, thank you. A lot was put together in just a few days.

Let's get to work.