Buffy the Vampire Slayer (the show) premiered when I was fourteen and I was instantly in love. The characters were a year older than me and I immediately identified with them, adored the dialogue and the writing, and it was hugely foundational for me. As a young writer, I was less interested in the actors than I was the writers of the show, and as the years went by, I began looking them up and following their other work. Of course, Joss Whedon was the focus of this, as he was the creator of the show.

So I immediately followed Firefly as it aired, and was crushed by its cancellation as so many others were. And Buffy's (at the time) conclusion. And Angel's cancellation. And Firefly's big screen continuation, Serenity, when it did not do so well.

Then a new show was on the horizon--Dollhouse! Would this one survive without network interference? Would I get another seven years of something I love? No, it had two short seasons (and look, I liked Dollhouse, and this post is not the place to bitch about what shows you liked or didn't like--I do recognize it was polarizing) before being cancelled.

Whedon was fairly obscure to a lot of people. Even with all of this work produced, if I brought up his name, I'd get a lot of, "Huh?" outside of geek circles. His Wonder Woman project didn't get off the ground either.

Then came The Avengers.

One of the highest grossing films of all time. Almost universally loved by everyone. I adored it and up until that point hadn't seen any of the related Marvel films. Hell, you say "Avengers", I think of Emma Peel (which I make no apologies for).

But that film was HUGE, it put Whedon the map in a way he wasn't before, and it afforded him a lot of new opportunities.

What is my point? Oh, I have one. Thank you for holding on for it.

Writers, sometimes you suffer setbacks because there is something greater for you waiting in the wings.

You work and you slave over a project you love. You put your heart and soul into it. And maybe it's good. Maybe it's fucking awesome. Maybe it's original and sharp and wonderful.

But maybe people don't respond to it. Maybe it's too hard to define, or the market's saturated. Maybe it's not the right time for it. Regardless, it's rejected. Whether by agents, or editors, or readers, that project doesn't really get off the ground.

This is one of the reasons why I encourage people to keep writing new books instead of pinning everything on one project. Why I don't think that, when your first series is rejected, you should immediately self-publish and forgo writing new books. Like your characters who are made stronger when forced to find ways around the obstacles you toss in their path, so are you.

I have hit these blocks over and over again. It sucks. It hurts. It's tiring. I wish certain a certain series did better as there are more books I want to write, but if it had, I wouldn't've gone back to the drawing board and created a new series--one that I am head over heels in love with. I don't know if it'll sell, but the process of writing it made me a better writer than I would've been if I just stayed with the same books for years. I have twenty-six finished books, dozens started, short stories and novellas all over the place, and each one forced me to learn and grow and become better at what I do.

There is a lot out of your control as a writer. You can't make people like or even READ your work. You can't dictate how your career will go. You can't force a home run. Now, you can practice your swing. You can put in the work to be better. But when you get up to bat, there are going to be all kinds of things out of your control: all you can do is swing.

If the ball doesn't connect, or it does but you hit a foul, or you strike out over and over...the only chance you'll have at hitting a home run in the future is if you keep on getting up to bat. If you keep on swinging.

There is no guarantee. And yeah, it might not be fair. I wish there was more Firefly. I would've liked to see Dollhouse grow and develop over time. But Whedon kept on moving forward, past every obstacle, and ended up with the motherfucking Avengers.

You can too. Your home run is out there. Keep swinging. 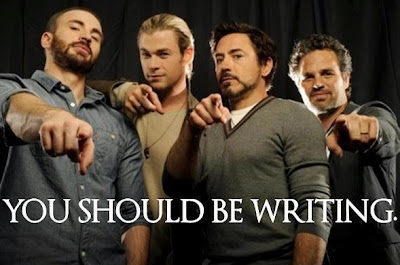